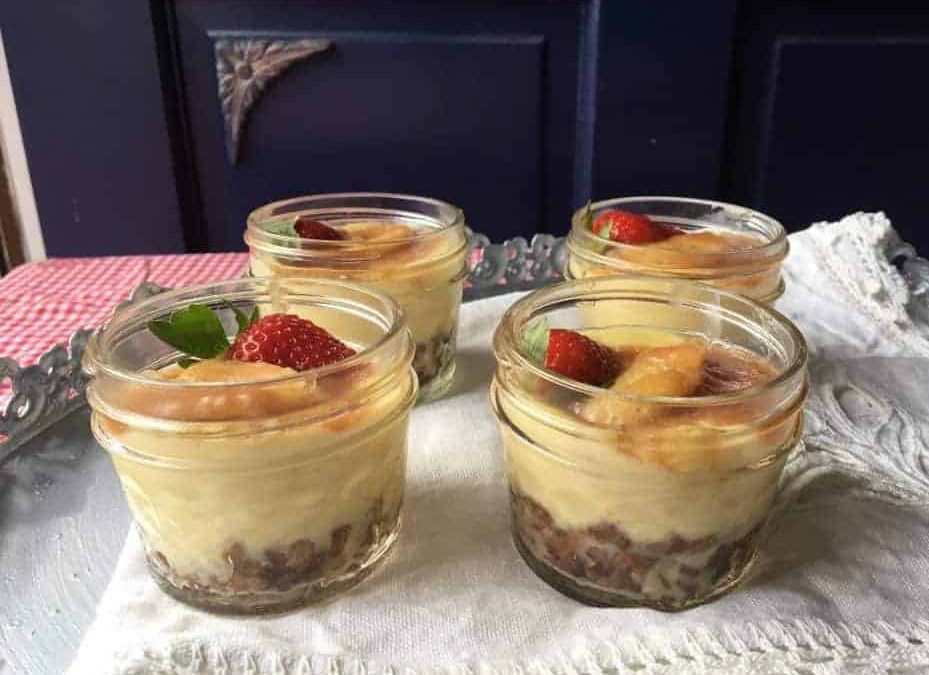 Are you looking for sugar free dessert recipes for the holidays?

This month my friends and I with the Recipe Redux have been working in our kitchens to create our most decadent, delicious sugar free dessert recipes for diabetics and everyone else which made with the new sweetener called Swerve!

I received free samples of Swerve mentioned in this post. By posting this recipe I am entering a recipe contest sponsored by Swerve and am eligible to win prizes associated with the contest. I was not compensated for my time.

I have recently become acquainted with Swerve sweetener. It is a natural sugar called erythritol which contains no artificial ingredients, preservatives or flavors. It is made by fermenting fruits and starchy root vegetables which include melons, grapes and asparagus to create a sugar alcohol which is less likely to cause GI distress compared to other sugar alcohols used to sweeten foods.

Many sugar substitutes do not brown well, caramelize or have the same texture in recipes as those cooked with sugar. However, Swerve has been successfully used to glaze, caramelize, dust, brown, drizzle, sift, frost and sprinkle! Swerve also measures like sugar so it makes it easy to use in favorite recipes that normally call for sugar. You might want to start off with a little less sugar that your originally called for and when you give it a try.

I have found Swerve to be a little sweeter than sugar so I cut back about 25 % of what I would use for sugar. I also recommend not cutting out all of the fat in your favorite dessert recipe because you will get a better texture and it will help Swerve maintain the flavor that you are trying to achieve.

Being a registered dietitian, I am familiar with the health benefits of a diet that is lower in added sugar. Too much added sugar can increase the risk of increased inflammation in the body. Since swerve tastes so much like sugar, it is a great way for us to indulge in something sweet because it Swerve has almost zero calories and an entire cup of it as only 44 calories!  It is a great for diabetics because it does not affect blood sugar or insulin levels like sugar does. It also does not contribute to dental carries.

One of my favorite things about Swerve is the fact that it was born and raised in New Orleans! There they carefully source all of their non-GMO verified ingredients from North America and Europe. I like the fact that they care what ingredients they put in their product. That is why I decided to make a dessert that highlights some of the great desserts served in New Orleans! I also love that they use non-GMO fruits and vegetables from the United States and Europe.

My Bananas Foster Mini Pies with Praline Crust are part Banana Fosters, part banana cream pie sitting on top of a rich pecan praline crust. It is the perfect New Orleans dessert because it uses Swerve! Although my recipe does not use real alcohol in the Bananas foster topping and does not burst into flames, you would never know it’s not the real thing when you take a bite into it. And it is as satisfying as if it was made entirely with sugar! But it is a sugar free pudding recipe.

After reading a little bit about local desserts in New Orleans, I discovered that Bananas Foster was created in 1951 at Brennan’s restaurant. I knew that it is a flambe recipe which means when the alcohol in the recipe is heated, the dessert bursts in flames.

At a local well-known restaurant where I live, Bananas Foster is the highlight of the dessert table. I also found that pralines originated in France and were used as a filling but when it was brought to New Orleans, it took on a new form as a caramelized, crunchy, melt in your mouth candy treat! And of course, banana cream pie is popular all over the South but is available all-over New Orleans.

These little mini pies are part banana foster, part banana cream pie with a rich pecan praline pie crust! It is the perfect New Orleans dessert because it uses Swerve! Although, this Banana Foster topping does not contain alcohol and burst into flames, it makes a delicious topping for these mini pies. The pies are miniature in size so you can have a little bit or have another, and this recipe and the others shared by my friends at the Recipe Redux make some delicious sugar free dessert recipes for diabetics!

Garnish with a sliver of strawberry to give it a pop of color.

In a medium saucepan melt butter and add flour over medium heat to make a roux but don’t brown. Whisk in swerve, a pinch of salt and milk. Cook until it is thickened. Take off of heat. In a small bowl, add a little bit of hot filling to the beaten egg and mix well. Then add the egg mixture to the rest of the filling. Heat just a little bit more until it thickens. Allow to cool and make the rest of the dessert.

To make the Pecan Praline Crust:

Preheat oven to 350 degrees. In a small skillet add butter, granulated Swerve, pecans, cinnamon and a pinch of salt to medium heat and allow to brown slightly. Carefully divide the crust between the eight jars and press the crust down. Put the jars on a cookie sheet and bake for about 10 minutes, being careful not to burn the nuts. Take out of the oven and when cool divide the cream filling between the eight jars.

To make the Bananas Fosters topping:

In the small skillet, add butter and granulated Swerve. Heat until the Swerve starts to caramelize and then stir in cinnamon and then bananas. Turned off heat and add the rum extract and stir very gently. When this topping cools slightly, add to the very top of the creamy filling and garnish with a small sliver of strawberry. Eat now or put in the refrigerator for about an hour and the bananas will hold up to serve.

I hope that you love these flavorful, sweet little pies and the other recipes shared make a great sugar free dessert recipe for diabetics. And now you know a little more about Swerve sweetener, that you enjoy experimenting with it in your favorite recipes to cut back on added sugar. I think that it would make a festive sugar free Christmas dessert also!

As a registered dietitian nutritionist living in Asheville, I love to share my kitchen creations with family, friends and my clients! In addition to these mini pies, you will also find additional Sugar free dessert recipes for diabetics from my friends with the Recipe Redux below and more dessert recipes on my blog!

Time to Get Your Swerve On!