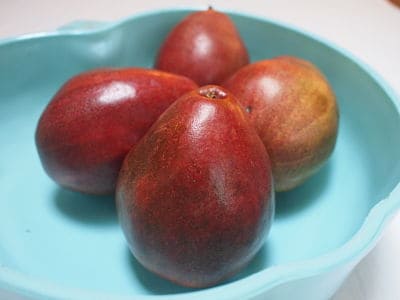 This fall look for some locally grown pears and my pear pancake and pear bread pudding would be perfect! You just can’t beat a pear that has been grown close to home instead of picked ahead of time to travel across the country or the ocean!

Pears are not one of the most common fruits in many of our diets and this could be because they are a little thin skinned and can become bruised easier than apples so they may not travel as well. A pear can be ripened at room temperature. To check and see if a pear is ripe, you can check to see if its neck is soft.

Pears are low in calories, high in fiber, antioxidants, flavenoids and a source of vitamin C.

There are a lot of varieties of pears which include Red or Green Anjou, Bosc, Comice, Red or Green Bartlett, Concorde, Seckle, Starkinson and Forelle. Check out these pear varieties here.

Pears can be used in place of almost any recipe where apples are used.

Here are tasty ways to get pears in your diet

Here are two tasty recipe ideas that I have created for the fall pear season! I hope that you enjoy!

Deborah Madison a well known chef and local food advocate has a fantastic coffee cake recipe in The Savory Way where she combines pears, almonds and cardamon! In this skillet pancake, I have incorporated these flavors!

Heat oven to 400º F. Lightly coat a 9 cast iron with oil. Core and cut pears into 12 slices  and arrange them in the skillet. Combine 1/2 cup sugar, cardamon, flour, eggs,  milk, almond extract, Earth Balance, and a pinch of salt and beat well with a whisk until eggs become slightly fluffy. Pour the mixture over the pears. Place the skillet in the oven and bake until springy to the touch, 25 to 30 minutes. Remove from oven. Serve warm and cut into 8 pieces.

Heat oven to 375º F. Butter a 9-inch square pan. (I used a 9 inch skillet to make mine.) In a saucepan, heat the milk, sugar, cinnamon, Earth Balance and salt until small bubbles form. In a bowl, whisk together the eggs, then add the warm milk mixture to the eggs in a slow, steady stream, whisking constantly.

Add the vanilla to the mixture. Layer the square pan with the bread. Top with the pears. Pour the milk-egg mixture into the baking pan and sprinkle with the cinnamon. Bake until golden, about 35 minutes. Serve warm. This is great with a little dollop of whipped cream.

I hope that these recipes for pear pancake and pear bread pudding give you some different and delicious ways to incorporate pears in your meal plan. Head to your local farmers’ market to get them! As an Asheville registered dietitian nutritionist, I believe that we are what we eat, and this includes eating minimally processed foods and food grown as close to home as possible.

I have included more pear ideas in my book Farm Fresh Nutrition which is a health and wellness book about the local food movement that includes a lot of plant-based recipes.